If you and I played

A game that never paused,

Would we live playfully forever?

Would a poor throw of dice mean—

And if you won and I lost,

Would it mean nothing to my boss, spouse, and dog?

You are busy taking down an opponent in a first-person shooter. You turn around the corner, and just as you are going for the kill, a beer can topples and spills all over your keyboard. Life sucks you out of the vicarious war zone into the one in front of you. You make a split-second decision on whether to push on or to clean the mess. The boundaries of game and life merge further, and your keyboard acts up. You lose.

Where do games end, and where does life begin? Is there such a boundary between life and games? When are we inside a game, and when are we out of it? Maybe, life feeds games and games feed life, but if life were to become a game, what would that experience be like? Game theorists and designers explore these questions, and they are of particular importance to those of us looking to “use” games to affect change.

In their book, Rules of Play, Eric Zimmerman and Katie Salen talk about the concept of a Magic Circle, first proposed by Johann Huizinga. A magic circle is the idea that games are marked off by an imaginary boundary that separates them from real life. They say, “As a player steps in and out of a game, he or she is crossing that boundary—or frame—that defines the game in time and space.”

They quote Johann Huizinga who describes this boundary as, “All play moves and has its being within a play-ground marked off beforehand either materially or ideally, deliberately or as a matter of course. Just as there is no formal difference between play and ritual, so the "consecrated spot" cannot be formally distinguished from the play-ground. The arena, the card table, the magic circle, the temple, the stage, the screen, the tennis court, the court of justice, etc., are all in form and function play-grounds, i.e. forbidden spots, isolated, hedged round, hallowed, within which special rules obtain. All are temporary worlds within the ordinary world, dedicated to the performance of an act apart.” – Johann Huizinga

We are intuitively aware of this distinction between play and life, as are other animals when they bite and jostle in jest, knowing all the while that this is not a fight. Examining this distinction is of special importance to us if we dabble in gamification, where game-like elements guide what we do in life; or if we use games for creating change; or for bringing about learning that is relatively permanent and goes beyond the experience of the game. In these cases, we perhaps depend on players transforming this boundary, such that we can situate games in non-game contexts. So, what are the characteristics of this boundary that are worth examining from that perspective?

As Johann Huizinga describes it, the boundary could be a physical one (although not necessarily so), like a playground, an arena, a pitch, a computer, or a gaming console.

Embedding games in non-game contexts can transform the physical space. In fact, a classroom becomes a Magic Circle, the moment you say, “Let’s play a game.” Participants become chirpy, alert, team spirits rise, and usually, everyone is eager with anticipation. You don’t need to draw out a physical separation, but the classroom itself changes into a different space.

As learners enter the magic circle, they usually dawn hats based on the games they play. This act changes the flavor of interactions they have with each other, the trainers, and the learning. Compare this to the physical space in a lecture format that actively discourages interaction.

Games in other spaces like parks, museums, malls, conferences also change the physical spaces, even without too many props.

“The magic circle is the boundary that players negotiate.” – Juul

Most theorists say that the Magic Circle is not a rigid separation between life and games, but a fluid phenomenon decided and accepted by the players. Like in the example of spilling beer on the keyboard and losing the game, life and game space often merge and segregate on their own, depending on what the player concedes. In this case, you and your opponent may either decide that you lost the game, or you may both agree that the game was invalidated by the keyboard stopping to work. The boundary is in the hands of the players. 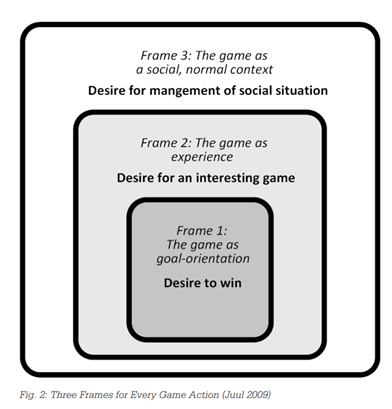 In this scene in Friends, Chandler tries his best to lose the game he and Monica are playing against Chandler’s boss and his wife. Monica’s desire to win and Chandler’s wish to be socially pleasing to his boss result in a hilarious pair of players operating within different frames.

Since we’re looking at the Magic Circle from the perspective of using games for a purpose or games in non-game contexts, I must mention Roger Caillois, who in “Man, Play and Games” takes a rigid view of the boundary. He says that play is free, separate, uncertain, unproductive, regulated or fictive. Related to the boundary, he asks these questions: “If play consists in providing formal, ideal, limited, and escapist satisfaction for these powerful drives, what happens when every convention is rejected? When the universe of play is no longer tightly closed? When it is contaminated by the real world in which every act has inescapable consequences? Corresponding to each of the basic categories there is a specific perversion which results from the absence of both restraint and protection.”

Soccer matches, chess championships are fun to watch, but they may be incredibly stressful for players due to real-life consequences. However, most professional players of games voluntarily choose to play them and have fun doing so. This may not be true if you gamify a job and associate the results with job performance whereby a corruption of the magic circle is bound to result in stress and other negative effects.

Like Caillois, the psychologist Michael Apter refers to the protection that games provide. He says, “In play-state you experience a protective frame that stands between you and the “real” world and its problems, creating an enchanted zone in which, in the end, you are confident that no harm can come.”

In the film Dave Made a Maze, the protagonist makes a maze in his living room and gets lost in it. He is followed by his wife, friends, and the media as the maze comes alive and people start getting killed or lost in it. Does this remain a game or does it become life due to the loss of a protective frame?

When there are consequences related to losing a game, the desire to win may be high. The game may become goal-oriented, and all social norms may be flouted. Fierce competition may emerge, and people may act overly aggressive and even nasty with each other. Or it may simply stress the players out—some criticism of gamification is based on this.

A famous example of destroying the boundary between life and game is from Disneyland Resort Hotel, California, where gamification of laundry work forced people to slog inhuman hours, racked their nerves, and eventually led to a protest.

Design a Trivial Pursuit for students and relate the outcome to end of year scores, and the boundaries that players define for it will be different than if you hand out the game to students to play in their free time. The context impacts how players define the Magic Circle, and consequently changes the experience.

Whenever we design a game with a purpose/gamify something, it may be prudent to think:

When people enter the magic circle, things take on new and different meanings. A plate can become a steering wheel, and a wooden cube becomes an army general.

As Eric Zimmerman points out, “Within the magic circle, special meanings accrue and cluster around objects and behaviours. In effect, a new reality is created, defined by the rules of a game and inhabited by the players.”

In her game series, “Mechanic is the Message” Brenda Romero evokes complex experiences. As the name suggests, the mechanic itself is the message (the generator of new meaning).

In Romero’s game, Train, deeper meaning is created through the game pieces, the train, the game mechanics, and the fact that as you play the game you gradually realize that you’re ending up taking people to Nazi concentration camps to win the game. Wooden pieces become people and players develop a reluctance to play and even start to cry. In this case, the magic circle teleports the player to history, and they relate with it in a way that a history textbook may not be able to evoke.

You can read more about 'Train' here: http://brenda.games/train 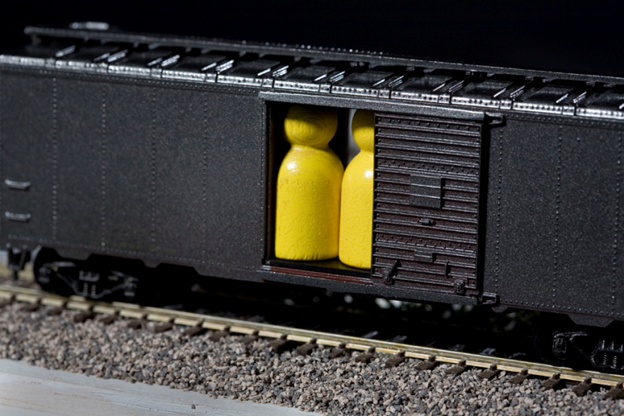 In games for learning/games for a purpose, the meaning-making aspect of the magic circles is of special importance. As in films, there is a voluntary suspension of disbelief as soon as players enter the magic circle of a game, and they are ready to allow things to take on different meanings. Of course, the design facilitates the meaning-making, and this could come from the physical game pieces, the interactions among players, the action-reaction play nuggets, the winning/losing conditions or from just about anything that players do when they step inside that psychological zone of a magic circle. Paying deliberate attention to the meanings being generated by your intervention is key.

Richard Garfield says that players bring something to a game and take something away from it. He says that the metagame is “the way a game interfaces with life.”

A meta element exists in every game. But when we use games in a non-game context, we experiment with the boundary between play and life. How a magic circle evolves, the presence or absence of the protective frame, the meaning conveyed within it, and the context in which a game is embedded may change the entire experience of the game and of the purpose it is trying to solve.

Watching how the boundary evolves, and the role it plays in the experience can help us tweak our interventions to achieve their purpose and yet have a playful end.

In Defence of a Magic Circle: The Social and Mental Boundaries of Play: http://www.digra.org/wp-content/uploads/digital-library/12168.43543.pdf

The Magic Circle and the Puzzle Piece: Jesper Juul